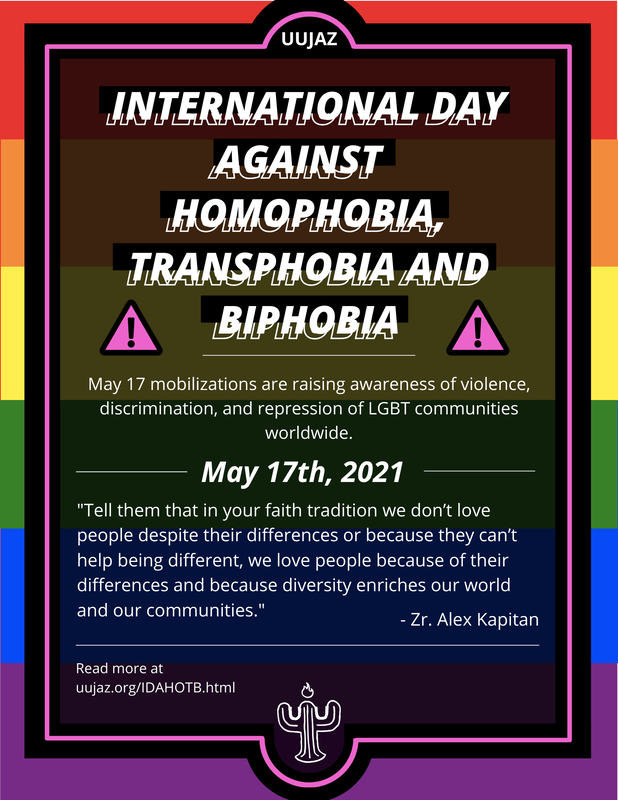 About the IDAHOTB graphic:
Zr. Alex Kapitan is a lay community minister, organizer, educator, and editor. Ze is a co-leader of the Transforming Hearts Collective and the founder of Radical Copyeditor.

I want to talk about choice.
I want to talk about the fact that just because someone who is out to destroy you says you chose to be the way you are does not mean the path of best protection is to counter with “no I didn’t, it’s not a choice, I was born this way and I’ve always been this way.”
Is who I am—my sexuality, my gender—a deep and real part of me, close to my soul? Yes. Are there choices involved? Of course there are.
I have made one choice after another to feel more at ease, more vibrant, more alive. I chose to change my name. I chose to allow myself to open to the idea that I might be attracted to women. I chose to open myself to the idea that first of all genderqueer people exist, second that I might be one, and third that I might be attracted to other genderqueer folks. After all of this, I chose to remain open to the idea that I was still attracted to men and might actually like being in a relationship with one. If I hadn’t made these choices I never could have lived into my full authentic self.
And you know, there are some things that are more attractive to me than gender. I am attracted to feminists. I’m attracted to queer people, and radicals. I am attracted to people who are assertive and like to make decisions. Is any of this biologically hardwired into me? Probably not. Is all of it impacted by culture? Definitely. But do I have every right to pursue relationships and experiences with whoever I want, because it’s my body and my sexuality? YES.
It doesn’t matter who I seek intimacy, ecstasy, joy, or camaraderie with—sexuality is sacred. Love is sacred. And I deserve and demand the right to full control over my body and what I do with it and who I share it with.
So if anyone ever tries to invalidate you or the way you seek intimacy by saying “it’s just a choice,” tell them choice is sacred.
Tell them the inherent right of every person to have full authority and agency over choices they make about their lives and their bodies is a spiritual and human imperative—that there is a word for this and it’s liberation. That there is nothing more worth fighting for.
Tell them that in your faith tradition we don’t love people despite their differences or because they can’t help being different, we love people because of their differences and because diversity enriches our world and our communities.
Tell them that in the final reckoning there is only one choice that will be judged, and that’s their choice. Tell them you hope they choose love.
​
Alternate download formats for this graphic:
Small (600 x 777 px)
​Canva Template

Related poems, prayers, and readings:
Learn more about May 17th